The breast or mammary gland is a highly efficient organ mainly used to produce milk and is a mass of glandular, fatty, fibrous tissues. Mammary glands are exocrine glands that are enlarged and developmentally are modified sweat glands that are actually part of the skin. They are also classified as tubualveolar glands and are located in the breast lying on the top of the pectoralis major muscles. These glands are present in males and females; however, they normally function in the latter gender only.

The biological role of the mammary glands is to produce milk to nourish a newborn baby and to pass antibodies needed for baby’s protection against infections (passive immunity) while the immature immune is initiating its function.

The breast is internally composed of the following parts: 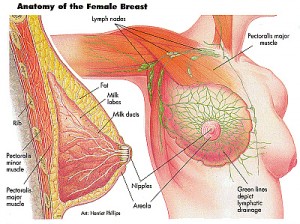 The breast is externally composed of the following parts:

The function of producing milk is regulated by hormones. Stimulation of the female sex hormone, estrogen, causes the development of glandular tissue in the female breast during puberty. Increase estrogen levels during pregnancy causes the breast size to increase in size through the accumulation of adipose tissues.

Presence of progesterone stimulates the growth and maturation of the duct system. During pregnancy levels of estrogen and progesterone rises (levels are needed to sustain pregnancy) that further enhances the development of the mammary glands. This is the main reason why pregnant women has larger and more enhanced breast.

Another hormone important for the implementation of mammary gland function is the presence of prolactin and oxytocin. Without these hormones, milk will not be produced and ejected out of the breast. Prolactin from the anterior pituitary gland stimulates the production of milk in the glandular tissues while oxytocin causes the ejection of milk from the glands.

Regardless of the mother’s physical condition, method of delivery (Cesarean section or vaginal delivery) or breast size, milk will be produced. Increase levels of estrogen and progesterone during pregnancy suppresses lactation as increase in the level of these hormones inhibits prolactin production. However, increase levels of these hormones early in pregnancy stimulate the growth of milk glands in preparation for lactation. This is the main reason why pregnant women’s breasts tend to increase in size due to larger glands that result to more fluid accumulation and formation of some extra adipose tissue. 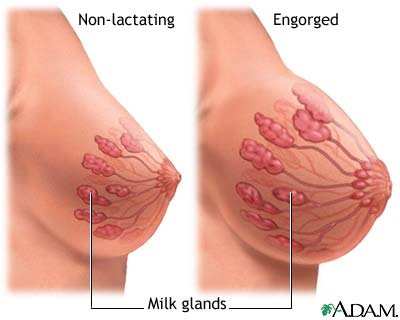 Estrogen and progesterone levels drop after delivery that stimulates the production of prolactin. Prolactin is responsible for breast milk production. If the mother wants to suppress lactation, lactation suppressing agents should be given immediately after placental delivery to be effective. The milk ducts become distended when breast milk begins to form. The woman’s breasts become fuller, larger and firmer. For some this is accompanied by a throbbing pain or feeling of heat in the breasts. The feeling of tension in the breast that most likely occurs by the third or fourth pospartal day is called engorgement. Relief is achieved when the neonate starts to effectively suck the breasts or for those who have no plans of breastfeeding using a breast pump would be provide immediate alleviation.

Let-down reflex is the one responsible for pushing the milk outside the breast. This reflex is stimulated by the release of oxytocin. Oxytocin on the other hand, is released when an infant sucks the breast or the mother uses a breast pump.

Question Description I need support with this Computer Science question so I can learn better. 1. Identify three important wireless or mobile security vulnerabilities or threats/attacks (e.g. Bluetooth attacks, rogue access point, wireless denial of service, etc.) and explain each of them and provide prevention or protection solutions for them. 2. Discuss the advantages and […]

Description A hugeinternational oil company is considering its strategy in the Arctic Sea. The UK government has announced that a new drilling site in the Arctic Sea will be offered for sale on a competitive tender basis, the site going to the company making the highest bid. Temporary exploration of the site indicates that, over […]

Description Each student will present a 5-minute synopsis of a current business-related news event at the beginning of class meetings. The idea of this assignment is to promote verbal presentation skills and foster an analytical approach to decoding the daily events that may have meaningful impact on the business environment. Required Elements The assignment consists […]

Description What is the Open Discussion Thread on Social Distancing and Self-Quarantine Practices? What have been your experiences in this time when you are being encouraged to practice social distancing (keeping a minimum of 6 feet distance between other people in public places) and self-quarantine practices at home? How has it affected your daily life? […]

Description Paper Information: For this assignment you will be writing a professional memo to a co-worker explaining how the switch from traditional costing to ABC will impact the selling price of your company’s products or services. Be sure to indicate the type of company you are discussing in the memo. As part of your justification, […]

Description This assignment goes with the supplement chapter on the elderly in this week’s module AND the videos “The Oldest Old.” You are required to interview an elderly person over the age of 55 via telephone or facetime. Make sure to include a picture of your participant. No need to attach any picture. It would […]